Click on a map image or title to open the full-size map. Free Adobe Reader software is required to open maps. 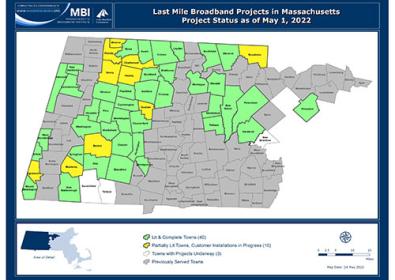 Map representing the status of last mile broadband projects.  Towns in the MassBroadband123 service area that were considered "unserved" and "underserved" by broadband qualified for last mile broadband funding support from the Commonwealth. The map differentiates towns according to four categories: (1) towns with fully complete and operational networks, (2) towns with partially operational networks that are still in construction, (3) remaining last mile towns to be completed, and (4) previously served towns not included in the program. 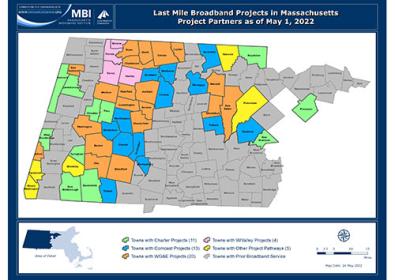 Map of project partners and pathways chosen to construct broadband networks in last mile program towns.  Towns in the MassBroadband123 service area that were considered "unserved" and "underserved" by broadband qualified for last mile broadband funding support from the Commonwealth.

Premises data and other data relevant to the planning and implementation of the last mile broadband program.  Data include served and unserved premises, parcel and town boundaries, roads, DCR fire towers, and the MassBroadband123 network.  Data are available for download in multiple formats: KMZ format for viewing in Google Earth, Shapefile format for use with CAD or GIS software, file geodatabase format for use with ArcGIS, or Excel format for non-spatial use. 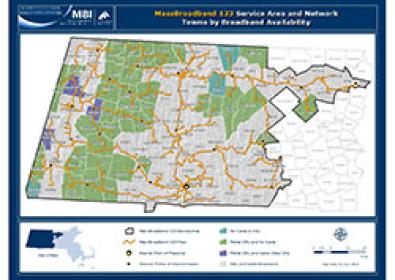 Map of towns in the MassBroadband123 service area that were considered "unserved" by broadband prior to the implementation of the last mile programs because they did not have cable, fiber-optic, or other internet services that met the FCC minimum requirement speeds of 25 Mbps downstream & 3 Mbps upstream.  The map differentiates the unserved towns by the type of infrastructure that was present in the towns at that time and is overlaid by the MassBroadband123 network fiber-optic cable and points of interconnection locations. 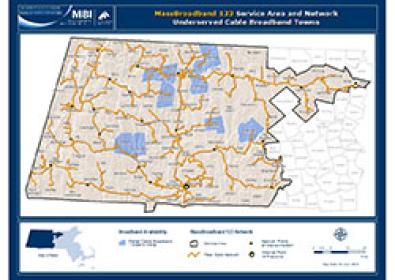 Map of towns in the MassBroadband123 service area that have cable broadband service, but were considered "underserved" prior to the implementation of the broadband extension program because they had less than 96% cable penetration rates. The towns are overlaid by the MassBroadband123 network fiber-optic cable and points of interconnection locations. 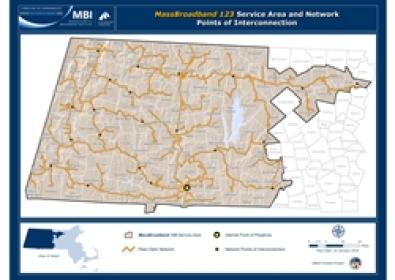 Map of the MassBroadband 123 service area and network, including the location of fiber-optic cables and points of interconnection.  MassBroadband 123 network construction and testing was completed and turned over to the MBI’s network operator in January 2014. 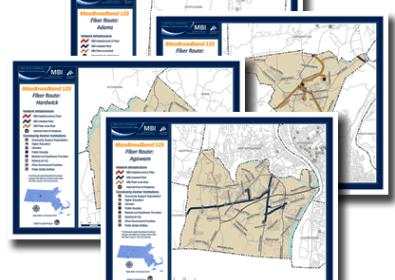 Select a town from the list below to view a map that shows the location of MassBroadband 123 fiber and community anchor institutions (CAI) that were connected in that community as of the completion of the project in January 2014. 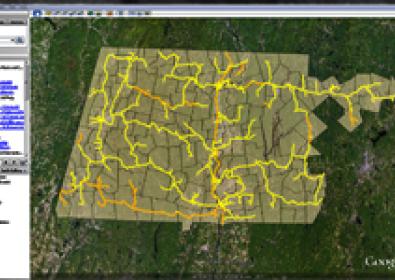 Service area boundary, towns served and built, and planned fiber routes for the MassBroadband 123 network as of the completion of construction in January 2014. 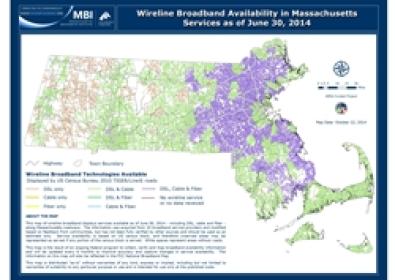 Wireline broadband services (DSL, cable and fiber-optic) for 19 of the service providers currently operating in the state. Service availability is generalized and displayed by US census blocks. 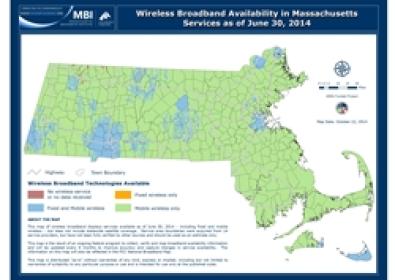 Wireless broadband services (fixed and mobile) for 14 of the service providers currently operating in the state.

The FCC collects broadband deployment data from existing broadband service providers through Form 477. Broadband maps and data downloads for Massachusetts and the rest of the country are available through their website.